PROVIDENCE – Two developers with two visions for creating more mixed-income housing pitched their proposals Wednesday to the I-195 Redevelopment District Commission, competing for the right to develop Parcel 9 in Fox Point. 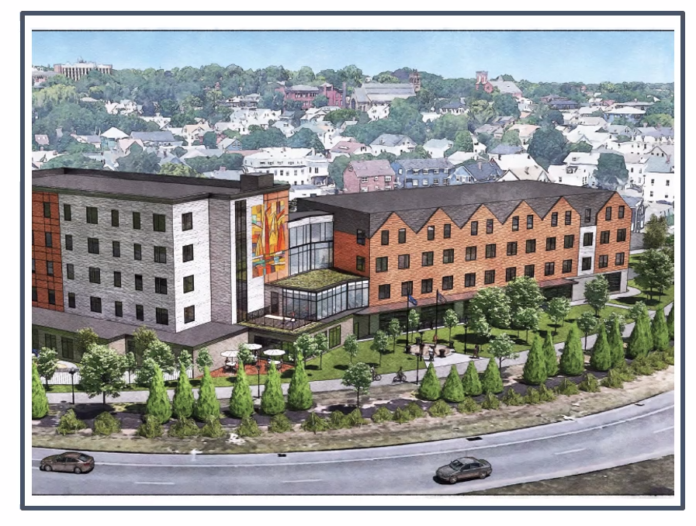 The property, which runs alongside the exit from I-195 into South Main Street, is adjacent to the historical Our Lady of the Rosary Catholic church. In the request for proposal, issued by the commission earlier this year, the language stated clearly that projects involving housing that create workforce or affordable rate apartments would be given priority.

The commission is expected to decide which proposal to move forward at its Oct. 21 meeting.

The size mix would include one-, two- and three-bedroom units. The architect explained that they didn’t want to build more micro-apartments.

The developer would pair with BETA Group, of Lincoln, and The Architectural Team, of Chelsea, Mass., on a design that would involve two buildings and 131 apartments. Its mix would be aimed at studio, one- and two-bedroom configurations.

More than half of the units would be leased at affordable rates, while 18% would be affordable to people in the workforce income levels. About 41% would be market-rate.

Its design would be oriented toward the City Walk walking path along the eastern side of the property, as well as the Bessie Way of the building. A small coffee shop or restaurant would be part of the project.

The commission took more than 30 minutes of public comment, much of it directed favorably at the ONE Neighborhood Builders’ project.

State and city elected officials spoke in favor of the application, including John Goncalves, a Providence City Councilman who represents the neighborhood.

He said he appreciated that the ONE Neighborhood builders project — to be called the Ernestina — was making an effort to work with the local community. And it also recognizes the Cape Verdean resident population who had been displaced from the neighborhood. The Ernestina is the name of a transport ship that carried goods back and forth between Cape Verde and Fox Point until the mid-1960s, according to Hawkins.

“This project is in keeping with the neighborhood fabric,” he said. “It appears to be totally in keeping and scale with the community.”

Mary MacDonald is a staff writer for the PBN. Contact her at macdonald@nullpbn.com.